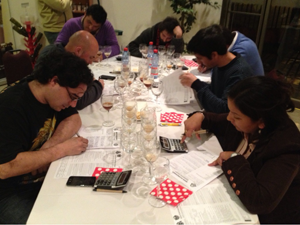 An exam candidate is prohibited from retaking a BJCP exam of the same type while that exam is still open. An exam must be closed and the results recorded in the BJCP database before a retake of the same type is allowed. Exam types include: Beer Judging Exam, Beer Written Proficiency Exam, Mead Judging Exam, and Cider Judging Exam (and any future exams created after this policy is enacted).

A protest of an exam score counts as an exam attempt. That is, the prohibition on retaking an exam of the same type remains in effect during the period when the protest is open. The protest must be closed and the new score recorded in the BJCP database before a retake can be attempted.

There is no prohibition against having simultaneous open exams of different types, as long as the examinee does not have more than one open exam of each type. For example, an examinee may take the Beer Judging Exam, the Mead Judging Exam, and the Beer Written Proficiency Exam on the same day, provided they do not have an open exam of any of those types.

The rationale behind this policy is that it is unlikely that an examinee will show significant improvement in a very short timeframe, and that multiple attempts at the exam take exam seats away from other potential candidates and cause undue strain upon the exam grading program.

The Exam Director for a specific exam has the authority to waive this policy for a specific candidate, but this exception is expected to be very rare. The waiver must be granted in advance of the exam, never retroactively.

How do I join the BJCP?

What is the significance of my BJCP number?

What is our corporate/financial/tax status?

I have a problem, question, complaint, etc. Whom do I contact?

Go to the Library »
x
Top