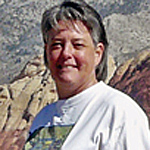 Each Newsletter the BJCP will be spotlighting a different member of the BJCP.  For this month we interviewed long time organizational contributor and newly elected regional representative, Grand Master II Judge Gail Milburn.

Please, give us a brief introduction about yourself, feel free to add anything you’d like to share.

(Gail Milburn) Thank you for the opportunity to introduce myself as the new North Region BJCP Representative! As a judge since 2004, I am honored to move to this level of service to the organization. Some judges may already recognize my name since I have been sending judge pins as the co-Assistant Exam Director in collaboration with Sandy Cockerham for the last seven years or so. Additionally, I’ve been working with the outgoing North Region Representative, Brian Joas, as the Assistant Representative since 2018. With this service to the BJCP, along with grading and judging, I was recently able to attain the rank of Grand Master II. I also have Mead and Cider endorsements and enjoy judging those beverages a great deal.

How did you get interested in homebrew and/or craft beer/mead/cider?

(GM) Originally, I began homebrewing in 2001 because I couldn’t afford to drink Guinness Irish Stout, which was hard to find and expensive in Michigan way back then. I walked into my neighborhood homebrew shop, Adventures in Homebrewing, and asked the owner if I could make this delicious beverage and, lo and behold, I had a nice brown ale three weeks later. It wasn’t Guinness but that just made me try to replicate it a bit more! As I fell hard into the hobby, brewing twice a month, I realized I wanted to learn more about beer styles and naming specific sensory differences in the styles. That led me to a craft beer appreciation and judging preparation class led by Rex Halfpenny, a long-time fixture in the Michigan craft beer scene. He encouraged me to take the BJCP exam in 2004 (now the legacy exam in which the written questions and four beers were presented at one sitting). It was the hardest exam of my life and worse than anything I had done in graduate school! Thirty minutes after finishing the exam, I was judging my first competition and I was hooked. I started volunteering to judge at our State Fair and First Round Regional National Homebrew Competitions, which, along with exam scores in the 80s, led to the honor of judging at the Final Round of NHC two years later. I have been able to continue to be an active judge, adding the additional honor of Best of Show judging at competitions such as NHC and the International Mazer Cup for mead. Along with an impressive number of Cider professionals, I’ve been able to judge at the Great Lakes International Cider and Perry (GLINTCAP) competition for a number of years which helped me in preparing to take the BJCP Cider exam. I have also been able to be the lead organizer for the Michigan Mead Cup since 2018. Of course, I had to retake the tasting exam to boost my overall score into the Master-level range and it was still a difficult task even after judging for over ten years!

What do you like about being a BJCP judge?

(GM) Looking back, I realize that each of my judging experiences have led to greater opportunities to learn from truly phenomenal expert judges, and subsequently have the chance to judge a wide variety of beverages entered from all over the world. I’m very proud of the fact that the North Region includes the western half of Canada, as well as Alaska, both of which were underrepresented in the past when the BJCP was largely only focused on North America, and most specifically, on the lower 48 United States. With the phenomenal increase in the involvement of international BJCP judges, competitions, and exams I hope to be able to travel to assist in growing the BJCP worldwide. Our organization is truly benefited by the involvement, skills, and knowledge brought by judges around the world and I hope to continue learning from our judges in all corners of the earth! Meeting a wide variety of people in a wide variety of environments, judging a wide variety of beverages, and learning about ever-increasing beer, mead and cider styles is the most exciting part of being a BJCP judge for me. I learn something in every competition.

What do you do to keep your judging and palate sharp?

In closing, I’d like to offer a bit of advice to judges: judge often! Travel as far as you can as often as you are able in order to experience a range of competitions, more beverage variety, more learning opportunities. Taste and smell everything thoughtfully. Try to pick apart the nuances of your morning coffee or tea, the vegetables on your plate, the meat you may eat, and the beverages you drink. Close your eyes if it helps you concentrate on the smells, the flavors, the feel of the food or drink, memories or experiences you have had which is remembered by those smells, flavors, and sensations. I often relate judging to the triggering of specific memories so, as an entrant in a competition, if you’ve gotten a scoresheet from me that discusses the breakfast cereal Froot Loops or Cheerios, or the experience of mowing the lawn, fishing, eating beef stew, or picking ripe apples, your entry triggered that memory! Judging is sometimes a bit like a free-association exercise for me (OK, my career as a Social Worker is showing here!). I’d also encourage you to join a homebrew club and help offer feedback to other club members, as well as accept feedback and observations on any homebrew or craft brews you bring to meetings to share. Read the many resources on judging, beverage styles, brewing techniques, and off flavors in the BJCP, American Homebrewers Association, and American Mead Makers Association websites. And most of all: have fun doing it! Beer, mead and cider are fantastic beverages, full of nuance and subtlety, and of such a huge variety that you can spend a lifetime learning!

Where do you see the organization being in the future?

From the trends I have seen over the last 18 years, I am pleased to see the BJCP becoming even more inclusive of international styles that haven’t been well-known in the United States. Bringing more and more judges into the BJCP from wide-ranging countries helps expand all of our experiences and knowledge. Additionally, I have been pleased to see more women active in the organization, including a number of women in the highest ranks. In sending new judge packets to examinees in the US, I have noted a large increase in women taking the exam and in getting promoted to higher ranks. I hope to further encourage diversity among the BJCP with more judges from a variety of racial, ethnic, and ability backgrounds. I also hope to encourage more judges to become involved in the BJCP organization itself. Committed volunteers are so desperately needed in all areas; if you are National rank or higher, please consider grading! Grading exams was one of the ways I continued to grow in my knowledge and prepare for taking another exam. More committed graders in the pool will most certainly help with significantly decreasing the lag time between taking an exam and getting scores returned.