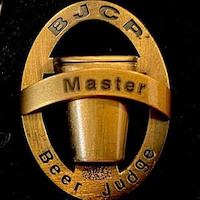 On rare occasions, the BJCP board of directors awards the rank of Honorary Master to recognize judges who have demonstrated exemplary dedication to advancing the BJCP mission to encourage knowledge, understanding, and appreciation of the world’s diverse beer styles. In 2022, the BJCP board awarded this honor to Chris Swersey, of Salmon, ID, and Peter Caddoo, of Jefferson, LA.

Chris has directed the World Beer Cup and Great American Beer Festival competition for two decades, has contributed to improving how competitions are run, and his work has permeated both professional and homebrew competition scenes. Within the BJCP, Chris is not only one of the organization’s most credentialed and prolific competition organizers, but also a judge of high quality who has earned the respect of his peers.

Peter holds one of the first judge numbers the organization issued (A0001) and has a long history of advancing the BJCP mission. He is currently the Brew Master for NOLA Brewing, has been professionally brewing at least 35 years (with brewing stories from the 70’s), and he is still an active judge. He was one of the first National rank judges in the organization, earning the rank after his first exam. Those nominating him for this honor report that he is a huge inspiration to local aspiring and current BJCP judges, homebrewers, professional brewers, and beer people in general in Louisiana.

For these reasons, and because both Chris and Peter have demonstrated Master-level judging proficiency, the BJCP board unanimously voted to award both the rank of Honorary Master Beer Judge, including all of the privileges associated with the Master judge rank. Please join us in congratulating Chris and Peter for their achievements and thanking them for their support of the BJCP over the years!